To determine changes in greenhouse gas (GHG) emissions resulting from a mitigation intervention project, a reference point is necessary. Two types of reference points are possible: a base year or a baseline.

The use and calculation of baseline or base year emissions depend on the nature and objective of the intended mitigation calculation. 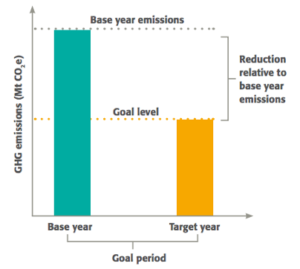 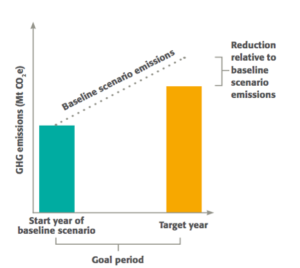 A base year is a year in the past against which current emissions are compared. The base year usually corresponds to the start of an intervention or policy. A base year is best to assess emission reductions toward climate change goals. Cumulative changes can be assessed over periods of time and compared against other projects with the same base year. If a time series for determining a base year has been estimated but there are gaps for data in some years, the following methods can be used:

Steps to calculate base year emissions are:

Also known as a business-as-usual (BAU) scenario or a projection, a baseline is a reference point that reflects the hypothetical emissions expected to occur without intervention. A baseline reference is appropriate for assessing improvements in emission efficiency or changes at a single point in time. It can also be used where base year data are not available.

A baseline scenario is a reference scenario representing future events or conditions most likely to occur in the absence of a given project or policy activities taken to meet the mitigation goal. Developing a baseline scenario may need to consider a series of factors that drive emissions and assumptions on how these factors are expected to change over time as a function of policies and actions.